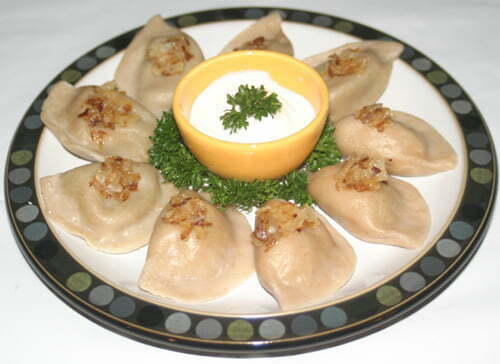 The pierogi have gained an exceptional sympathy from Poles. For decades, thanks to their diversity they have reigned on Polish tables as a dinner dish and as a festive dish prepared, among others for Christmas. Although pierogi are considered a traditional Polish dish, their real homeland is China. This is where ear-shaped dumplings filled with Chinese cabbage and meat were prepared for the first time. They reached Poland around the thirteenth century thanks to the monk Jacek Odrowąż, who liked them during his stay in Kiev and from there I will bring to Poland a recipe for their preparation. These unique dumplings are thinly rolled dough rings made of flour, water and oil filled with various types of filling. Such a disc is folded in half to form a semicircle and carefully finished with a dough frill. This way, skilled housewives create unique works of art. Their size depends on your own preferences. So they can be small 1-2 in, so-called ears, or large where one dumpling is the whole dish. Often however 2-2 1/2 in dumplings are prepared. They have gained their uniqueness thanks to the possibility of serving them both sweet and salty, in boiled, fried or grilled versions, thanks to which they are able to win the hearts of even the most demanding gourmets! The most popular pierogi in Polish homes are: Ruskie pierogi aka potato and cheese pierogi are stuffed with white cheese, boiled potatoes and fried onions. Sauerkraut and mushrooms pierogi -they are prepared with sauerkraut and mushrooms.Meat pierogi are filled with minced pork or poultry. White cheese dumplings pierogi, these are so-called cottage cheese pierogi. Fruit pierogi are filled with strawberries, raspberries or blueberries. Sweet dumplings are served with melted butter and sprinkled with sugar, while the dry version is sprinkled with fried onion or bacon, less often with sauce or ketchup.

This site uses Akismet to reduce spam. Learn how your comment data is processed.